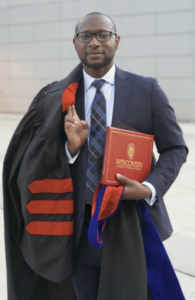 Kazeem graduated from UW with his PhD in Second Language Acquisition (2019), focusing on the pedagogy of Less Commonly Taught Languages. He received his M.A. from the Department of African Languages and Literature —now the African Cultural Studies program.

Kazeem found his passion for language in Nigeria, where he studied English education at the University of Lagos in Nigeria. In 2008, he received a Fulbright Language Teaching Assistantship (FLTA) with UW, which helped him appreciate the importance of teaching Yoruba. “I realized the value in teaching my native language,” he said, which he did with a perspective rooted in the pedagogical tools he learned through his bachelor’s degree in education from the University of Lagos.

Kazeem’s dissertation looked at language in the study abroad context—specifically Yoruba language learners’ social-interactional and cultural practices in southwest Nigeria. He analyzed interactions involving learners, teachers, host families, and random community members to understand what happens when they all come into contact within the study abroad setting. Tracing these interaction episodes, Kazeem examined both the pattern of language use and the ideologies reflected in the discourses they all engaged in.

Kazeem reflects that his time at UW prepared him for his previous and current position at Indiana University. Through engagement with African Studies, Kazeem developed professional skills and found his interest in outreach. Opportunities such as African Storytelling on Wheels, World Languages Day, and work experience with the PEOPLE program allowed Kazeem to connect with the broader Madison community, tell stories, and teach everyday people about Africa. The lessons he learned in these experiences have guided his mission for his postgraduate career.

After earning his PhD, Kazeem worked as the International Education Outreach Administrator at the School of Global International Studies of Indiana University. There, he connected with eight different Title VI centers to expand and align their outreach capacities. This position gave Kazeem a chance to connect with scholars and administrators worldwide, which he describes as “very humbling,” after his research in a West African community.

Based on his experience, Kazeem came to the NARLC with an abundance of ideas for the multifaceted center. From publishing textbooks to developing materials and training, Kazeem oversees the day to day operations there. He intends to support programs’ continued success, such as those that offer pedagogical resources and professional development. He also wants to expand the center’s potential through new training and networking opportunities. Ultimately, Kazeem wants to enhance the professionalization of the field of African language teaching.

At the end of our interview, I asked Kazeem if he had anything else he wanted to add. He said: “In my opinion, Madison is the best small city in the Midwest.” We hope to see you again here soon, Kazeem.