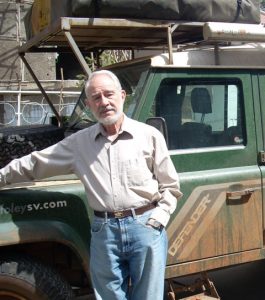 Herbert Lewis knew from a young age that he was interested in exploring cultures and communities different from his own. Until his junior year at Brandeis University, though, he wasn’t aware that there was a field called “anthropology” for just this purpose! When he got his hands on an anthropology textbook for the first time, he had a realization:

Lewis would go on to a rich career in cultural anthropology, studying two different Oromo regions in Ethiopia –  for which he received the Oromo Studies Association Award in 1993 – Jewish immigrants from Yemen and Morocco in Israel, and European-American and Oneida communities in Wisconsin. He taught at the University of Wisconsin-Madison for 36 years, from 1963-1998 and was not only the Chair and Director of the African Studies Program from 1993-1995 but was closely involved with the development of the program in the 1960s and 1970s. He has published five books and a multitude of articles, book reviews, and reports, and has served as an invaluable teacher and mentor to countless students through the years.

When Lewis began his undergraduate studies at Brandeis University in 1951, the field of African Studies barely existed. He happened to take a Hebrew course with a linguistics professor whose research involved the study of the Semitic languages of Ethiopia, including Amharic and the Gurage languages. This increased his general interest in Africa and sparked an awareness of Ethiopia. After graduating from Brandeis in 1955, continuing his studies at Columbia University, a lecture on the history of Ethiopia in a course on the Peoples and Cultures of Africa reinforced that interest. A few more hours in the library and Lewis became aware of the richness of the complex history and extraordinary variety of Ethiopia’s many peoples, cultures, and languages.

He conducted ethnographic research in Southwest Ethiopia from 1958-1960, studying the lives of the Oromo people of Jimma and the history and structure of the kingdom known as Jimma Abba Jifar. In 1965-66 he returned to do research in another Oromo area where the culture was very different; they had never had kings but community and political leadership depended on spirit mediums, men and some women who were possessed by powerful supernatural beings.

The 1960s was an exciting time to be in Ethiopia, he said. Ethiopia was ruled by an emperor, Haile Selassie I, who was trying to maintain maximum control while also instituting various modernizing reforms to a country that ranked near the bottom of the scale of “development.” Inevitably, those young people who managed to get an education were becoming increasingly politically aware, dissatisfied, and restive, leading to the emperor’s overthrow and the seventeen-year rule of the military (the Derg) that ruled in what it called a Marxist-Leninist manner.

The years from 1974-1991 were ones of drastic change and armed struggle against the regime. Through the decades, Lewis observed the rise of linguistic and cultural ethnic sentiments that largely coincided with regional divisions. These trends only grew stronger in the face of the political repression by the Derg.  By May 1991, several powerful regional military-political movements had defeated the Ethiopian army and overthrown the Derg. The new regime, the Ethiopian People’s Revolutionary Democratic Front, reorganized the vast country of almost 100 million people speaking more than 70 languages into regions based on ethnicity.

Indeed, Lewis says, ethnic tensions and conflict remain perhaps the greatest challenge facing current Prime Minister Abiy Ahmed, elected a little over a year ago today. Abiy has caught the attention of leaders across the globe through his welcome and striking political actions and promise of reforms, but there is a significant concern that he will not be able to maintain peace and stability long enough for these reforms to be instituted and last.

In terms of the Oromo people’s reaction to Abiy, Lewis noted, “there is no question that there was considerable excitement. After all, he is both a member of the Oromo Democratic Party and was born near Jimma [in Oromia].” In other regions, though, there may be much less enthusiasm and more questions as to whether Abiy can live up to his promises. Ultimately, Lewis would classify his feelings towards Abiy as cautiously optimistic. He compared the current situation to what was felt after the EPRDF overthrow of the Derg regime.

“There was a sense at that time of a new beginning…” he said, “Now, Abiy is doing something very similar. It looks very good, all of these promises of human rights, democracy, free expression, and permitting fair and free elections… But can they really do that? Will they? It’s still early times.”