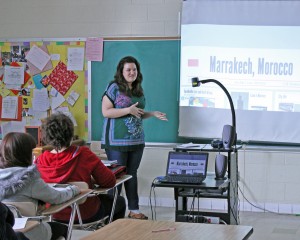 During the session, Herrera taught the students about Moroccan culture, shared Arabic greetings and served mint tea with dates to give students a further taste of the region.

“WIOC-Urban League initiative introduces middle schoolers to other countries, cultures,” from the Division of International Studies, 05/09/2014.