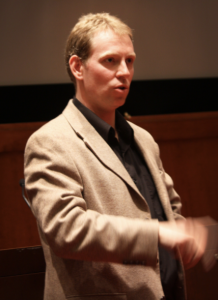 Dying Muslim in Ghana: Death as an Intellectual and Social Practice in the Nineteenth and Twentieth Centuries
Sean Hanretta
Assistant Professor
Department of History
Stanford University

Sean Hanretta will discuss two basic ways that West Africa Muslims made death meaningful, one which he describes as “corpse-centered” and the other as “community-centered.” Over the course of the nineteenth century a fundamental shift in scholarly attitudes took place bringing community-centered ways of making death meaningful into prominence. Political changes during that century and those related to colonial rule in the twentieth century facilitated the spread of these ideas throughout society, with important consequences for what it meant to be Muslim.

Conversation with Sean Hanretta
Students and faculty are invited to meet with Professor Hanretta on the field of African history, and on his training at the University of Wisconsin-Madison.

Sean Hanretta is an Assistant Professor of History at Stanford University. He earned a Ph.D. in History at the University of Wisconsin-Madison in 2003. His book, Islam and Social Change in French West Africa: History of an Emancipatory Community was published by Cambridge University Press in 2009. Hanretta’s current research focuses on changing ways of being Muslim in Ghana and on the history of religious belief and practice in West Africa more broadly.