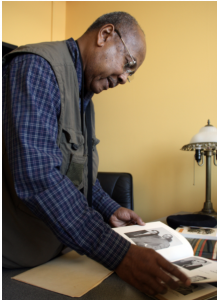 Adell Patton, Jr. was born and raised in the Eastern Arkansas Delta of the plantation complex. He graduated with Dr. William Allen Brown (1934-2007) from Kentucky State University (BS, Music, 1959); took the MA in US history and government at Butler University, Indianapolis (1965); admitted into the African history graduate program, University of Wisconsin-Madison (1968); conducted fieldwork in Northern Nigeria among the Hausa in the Jos Plateau (1972-1973); and was a doctoral student of Dr. Brown and awarded the PhD, 1975. He was among the first faculty in the West to teach courses on the African diaspora at Howard University in 1975. He has published the book Physicians, Colonial Racism, and Diaspora in West Africa (University Press of Florida, 1996), published an edited book with Shamsudeen O. Amali, et al, Ethnicity, and Citizenship And Democracy In The United States Of America [Africa Compared] (Ibadan: Humanities Press, 2003), published in two major edited works that changed the field: “The Ningi in Northern Nigeria, 1846-1902,” in Igor Kopytoff, editor, The African Frontier: The Reproduction of Traditional African Societies (Indiana University Press, 1987), “Howard and Meharry Medical Schools in the Training Of African Physicians 1868-1978,” in Joseph E. Harris, editor, Global Dimensions of the African Diaspora (Howard University Press, now in 2nd Edition, [1982] 1993). He published numerous other articles in referred journals and sundry. Patton has been a recipient of research awards to England and West Africa, such as the Foreign Area Fellowship, Senior Fulbright Fellowship, Fulbright Specialists Grant, and the Research Board Award of the University of Missouri System. Lastly, Patton has completed two manuscripts on his family history and that of other families in the Eastern Arkansas Delta.