The African Politics Conference Group (APCG) recently recognized Crawford Young’s The Postcolonial State in Africa: Fifty Years of Independence (UW Press, 2012) as the co-winner of the best 2012 book on African Politics. The other co-winner is Leonardo Arriola for this book, Multiethnic Coalitions in Africa: Buisiness Financing of Opposition Election Campaigns (Cambridge University Press, 2012). 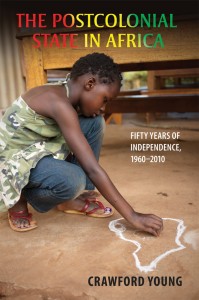 In THE POSTCOLONIAL STATE IN AFRICA: FIFTY YEARS OF INDEPENDENCE, 1960-2010, Crawford Young performs a magisterial analysis of African states’ trajectories over the past half century. Displaying a remarkable combination of empirical nuance, Africa-wide depth, and historical perspicacity, Young provides a set of conceptual categories to define the evolution of state development and regime type. Perhaps only Young could provide this comprehensive overview; he brings to bear some five decades of close observation of the continent into a single readable, often brilliant, analysis. He identifies key stages of the postcolonial trajectory as a method of periodization, addressing the underlying similarities and contextual factors that shaped each moment. He also highlights the current era as one of “divergent pathways,” suggesting that the future of African states is open to a variety of itineraries. In this synoptic framework, Young has produced a lasting contribution to African politics that will be invaluable to students of Africa as well as students of comparative politics more generally.