“To Each Proverb Its Prosthesis: the (De)Composition of a Traditional African Verbal Art at the Present Time”

This presentation draws attention to the phenomenon of retorts, out of ignorance or jest, which have been exuberant responses to the proverb medium despite its sacrosanctity and anonymity as a verbal art. From proverbs to postproverbials, the intention is to highlight the narrative of transformations and transgressions, hitherto taken for granted or ignored in traditional paremiology, but which have become present fixtures of contemporary cultural productions in African societies. What is a postproverbial? It is understood as a radical alternate or parallel saying derived from the convention, content, and sense of the traditional proverb. The nature of the postproverbial agency indicates a specific dynamic order, to be precise, an iconoclastic practice that brings the cultural philosophy of the original proverbial text to question, play, or blasphemy. Thus, postproverbiality is the evidence of inscriptions of urbanization and signs of (post)modernity in African societies. The postproverbial text is all about decomposition, dismantling, suturing, and (re)composition in radical paremiology. The variety of forms and categorizations reflects the multiple possibilities of the postproverbial text as prosthesis and presence in the proverb text. Using the Yoruba social space as an example in this presentation, I will point at the significance and value of the practice of postproverbiality in literature, media, and other communicative interactions. No doubt, the verbal activity of transgressions and transformations is an instructive feature of the phenomenon of postproverbials in Yoruba and other language communities on the African continent. 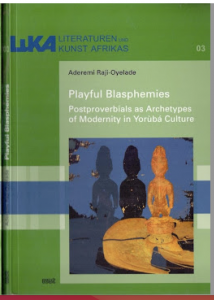 Ère Ìbejì on fan blades”: In Yoruba society, the “ère” means image, effigy, figurine, and mask, and the “ìbejì” is twin-child, the referent of either or both of a duality of being, carved in celebration or memory of a set of twins. There are two reflective shadows behind the “ère” itself. The montage is apt for the concept of postproverbiality because the radical proverb is a shadow of the original, and the double shadow points at the plurality of the radical text. The fan blades represent the modernist base and the potential of the whirl, the shifting and revolving force of the new proverb. The installation of “ère ìbejì on fan blades” is made from the original collection of the Author’s mother, dating back to 1960. 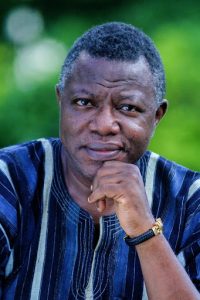 Aderemi Raji-Oyelade (aka Remi Raji) teaches Literature of the African Diaspora, Literary Theory, Creative Writing, and New Media in the Department of English, University of Ibadan, Nigeria. His scholarly essays have appeared in journals including Research in African Literatures, ARIEL, Wasafiri, Matatu, and African Literature Today. His book, Playful Blasphemies: Postproverbials as Archetypes of Modernity in Yoruba Culture (2012), has received acclaim as a seminal work in contemporary African studies. Raji-Oyelade has won multiple literary and academic prizes, including the ANA/Cadbury Prize (Nigeria), the Ford Foundation Research Grant (USA), the West African Research Council Prize (West Africa), and the Harry Oppenheimer Award (South Africa). He is the winner of the Humboldt University Talent Travel Award, the prestigious Alexander von Humboldt 2017 Alumni Award for Innovative Networking Initiatives, the 2018 recipient of the European Commission’s Erasmus+ Staff Mobility for Teaching Award, and the 2019 Distinguished Fellow of the Association of Nigerian Authors. He is the coordinator of the multi-site, pan-African research project on the theory and practices of postproverbials in seven African countries.