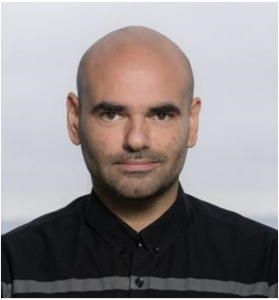 “The Beautiful Skin: Fantasy, Football, and Cinematic Bodies in Africa”

This presentation carries the title of my new book, which aims to highlight where football and cinema converge and diverge with regard to neocolonial fantasies. Yet, whose fantasy do football and African cinema articulate? Does this fantasy make both football and cinema distinctly “African”? The possible answers to these questions are necessarily connected to issues of body and identity, which I explore through the metaphor of skin in the works of Jean-Pierre Bekolo and Mahamat Haroun Saleh, among others. In their films, and in African cinema in general, the neocolonial body tends to be depicted as suffering and in the process of being emptied. This hollowed body, all skin as it were, is replicated so frequently that it becomes the very type of body that comes to define the twenty-first-century neocolonial subject. Therefore, the main focus of this presentation will be on skin and body—visual, aural, and haptic—as signifiers that may possibly also show that the film itself has a skin. As a result, could the body of film (i.e. the depth of both characters and film itself) hold the key to transitioning toward a post-neocolonial era, an era defined by “full” bodies and by personal affirmation?

Vlad Dima is an Associate Professor of African Cultural Studies and French at the University of Wisconsin, Madison. He has published numerous articles, mainly on French and francophone cinemas, but also on Francophone literature, comics, American cinema, and television. He is the author of Sonic Space in Djibril Diop Mambety’s Films (Indiana University Press, 2017). His second book, The Beautiful Skin: Fantasy, Football, and Cinematic Bodies in Africa, is forthcoming in 2020 with the Michigan State University Press.