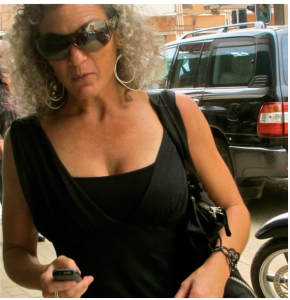 Anatomy of Kuduro: Thoughts on the Angolan Body Politic

Marissa J. Moorman is an historian of Southern and Central Africa. Her research focuses on the intersection of politics and culture in colonial and independent Angola. Intonations (Ohio University Press, 2008) explores music as a practice in and through which Angolans living under extreme political repression imagined the nation and how the particularities of music and historical moment cast this process of imagining in gendered terms. Her current book project, Tuning in to Nation, looks at the relationship between the technology of radio and the shifting politics of southern Africa as anti-colonial movements established independent states in a regional context newly charged by Cold War politics. She has written articles on Angolan cinema, dress and nation, and the contemporary Angolan music and dance genre “kuduro.”

Kuduro, meaning ‘hardass’ or ‘in a hard place,’ is a music and dance created by young people living in the capital city during the second decade of Angola’s civil war (the 1990s). It has a propulsive beat, a distinctive dance style, and performers distinguish themselves through their sartorial panache (known grife or swague) and verbal jousting (bifes). While kuduro bears the marks of war it is also a dynamic cultural practice entangled with the current political and economic situation. This presentation uses the metaphor of anatomy to dissect the politics of the body of this dance and music form as well as diagnose the body politic circa the second post-civil war elections in late August 2012.