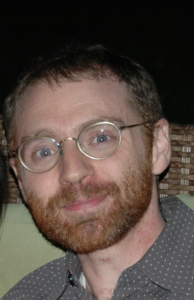 Samuel England is Assistant Professor of Arabic at the University of Wisconsin-Madison. His main interests are Classical Arabic poetry and adab, as well as Romance-language lyric of Iberia. He teaches Classical and modern Arabic literature, and is currently working on a book manuscript comparing the court cultures of the late ‘Abbasid Empire and thirteenth-century Castile.

In this presentation Samuel England examines North African treatments of Classical Arabic narrative during the twentieth century, specifically Prophetic anecdotes and the fictional maqamat (often translated as ‘séances’). Mahmud al-Mas‘adi, Tunisian author, educator, and political official, caused controversy by using the settings and personages of the hadith – reports of the Prophet Muhammad’s actions and sayings – in a fictional format. Although al-Mas‘adi defended himself by taking refuge in obscure and sometimes fabricated accounts of Islamic intellectual history, here England will argue that his writing itself shows the intertwined nature of narrative techniques in the Classical tradition.