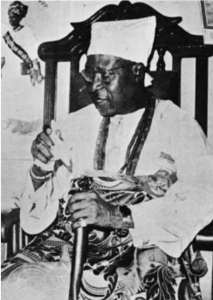 Presented as part of a special series of Africa at Noon talks by distinguished affiliates and alumni on the development and influence of Wisconsin’s African Studies Program.
Co-sponsored by the African Diaspora and Atlantic World Research Circle
Download Poster (pdf)

Description:
Contemporary Africa is teeming with sites of memory—sites much like those Pierre Nora described in his insightful reconstructions of French history. For Lagosians the unwritten past plays a significant role in interpreting the present. This talk describes the way they use ritual landmarks to describe living peoples’ statuses as indigenous members of their community but at the same time address concerns about their exceptionally heterogeneous origins.
Conversation with Sandra Barnes
Students and faculty are invited to an informal conversation with Sandra Barnes, Professor Emeritus of Anthropology at the University of Pennsylvania and an alumna of the UW Department of Anthropology.

Speaker’s Bio:
Sandra T. Barnes is Past President of the African Studies Association and Founding Director of Penn’s African Studies Center. She has written and edited numerous works, including Africa’s Ogun; Old World and New and Patrons and Power; Creating a Political Community in Metropolitan Lagos, which received the Amaury Talbot Prize for best book on Africa. She has served on the Boards of Directors of the American Council of Learned Societies, African Studies Association, Stanford Humanities Center, and Foundation for the Advancement of International Medical Education and Research. She is currently the senior adviser to the Africa Humanities Program, run by the ACLS and funded by the Carnegie Corporation. Her current research focuses on West Africa: pre-colonial social and cultural life along the Guinea Coast, post-colonial popular culture, and US policy in Africa’s oil-producing states.