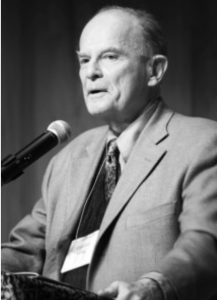 Presented as part of a special series of Africa at Noon talks by distinguished affiliates and alumni on the development and influence of Wisconsin’s African Studies Program.
Download poster (PDF)

Description:
Crawford Young’s presentation will build upon the Jan Vansina’s September 7th, 2011, presentation, adding some further detail to the early years, and covering such issues as the ASP’s role in the creation of the Afro-American Studies Department, the 1969 ASA crisis, and the middle years of the program into the 1970s and 1980s.

Speaker’s Bio:
Crawford Young was an active member of the African Studies Program (and second Chair from 1964 to 1968) and Political Science faculty from 1963 until retirement in 2001. He has also taught in Uganda, Congo-K and Senegal. His major books include Politics in the Congo (1965), The Politics of Cultural Pluralism (1976), Ideology and Development in Africa (1982), The Rise and Decline of the Zairian State (1985), and The African Colonial State in Comparative Perspective (1994).