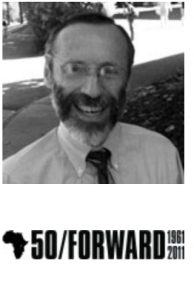 Presented as part of a special series of Africa at Noon talks by distinguished affiliates and alumni on the development and influence of Wisconsin’s African Studies Program.
Co-sponsored by the African Diaspora and Atlantic World Research Circle.
Download Poster (PDF)

Description
World historians struggle notoriously to include Africa in this field’s prevailing paradigms of imperial grandeur. In honor of my dynamic duo of Wisconsin mentors, Jan Vansina and Philip Curtin, this lecture will substitute historical processes prevalent in (but not particular to) Africa to invert the prevailing inherently teleological celebration of militarization to sketch the history of the world as I understand Africans to have viewed it.

Speaker’s Bio
Joseph C. Miller is the T. Cary Johnson, Jr. Professor of History at the University of Virginia.His doctoral research at the University of Wisconsin-Madison compared the historical oral traditions in one region of Angola with written Portuguese colonial records for the sixteenth and seventeenth centuries, eventuating in a monograph, Kings and Kinsmen: Early Mbundu States in Angola (1976), and numerous shorter studies. He placed the eighteenth-century history of Angola in its broader Atlantic (Brazilian and Portuguese) context in Way of Death: Merchant Capitalism and the Angolan Slave Trade, 1730-1830. His current project, dating from the 1975 Workshop in Comparative History in Madison, and supported in 2004-05 by a Guggenheim Fellowship, is a world history of slaving. The project will conclude with Slaving in World History (New York: Cambridge University Press, in preparation). Miller served as President of the American Historical Association in 1998. He was a member of the Board of Directors of the African Studies Association from 1985 to 1988 and served as Treasurer of the Association from 1989 to 1993 and as president in 2005-06.