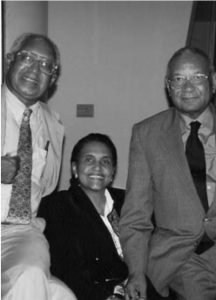 Description:
My project entitled, tentatively, Amadou-Mahtar M’Bow, In Service for Africa and the Third World, is not solely about UNESCO, but about a Senegalese intellectual, educator and politician who participated actively in the struggle for independence and economic development and whose faith in the emergence in a strong and confident African continent, has never wavered. However, having been associated with UNESCO for twenty years, thirteen of which as Director-General (1974-1987), UNESCO, the United Nations Education, Science and Culture Organization, a premier specialized agency of the United Nations system, will, naturally, be very central to my project.

For the purpose of this presentation, I have chosen to limit myself essentially to the debate on NWICO, The New World Information and Communication Order, the main avowed reason for the regrettable withdrawal of the United States from the Organization in 1984, and the discussion of the continued relevance of NWICO, in the light of the February 2011 developments in Tunisia, Egypt and elsewhere in the Middle East. As a footnote to this presentation, I will elaborate briefly on the touchy topic of Caste in contemporary Senegal, and in parts of West Africa, in view of M’Bow originating from the Ude – leatherworker Caste.
Speaker’s Bio:
Edris Makward was born in the Gambia of a Moroccan(Fassi) father and a Senegalese mother(Wolof and Waalo Waalo, from the ancient kingdom of Waalo). He was educated in the Gambia, Senegal, Nigeria (University of Ibadan) and the U.K.(University of London).
Makward has published articles, books and book chapters on Contemporary African Literature and Oral Traditions. He is the former Chair of Department of African Languages and Literature, former Director of African Studies Program UW-Madison, former President of African Studies Association, the African Literature Association, and of the West African Research Association.
After retiring from UW-Madison, Makward helped set up the first university in his native Gambia, UTG, as Deputy Vice-Chancellor and Acting Vice-Chancellor(2002-2005).