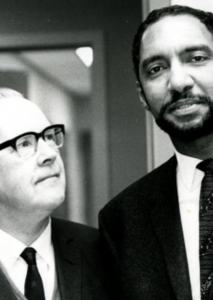 African Languages and Literature at Wisconsin: Reminiscences and Reflections

Presented as part of a special series of Africa at Noon talks by distinguished affiliates and alumni on the development and influence of Wisconsin’s African Studies Program.
Download Poster (PDF)

Bio:
Edris Makward was born in the Gambia of a Moroccan(Fassi) father and a Senegalese mother(Wolof and Waalo Waalo, from the ancient kingdom of Waalo). He was educated in the Gambia, Senegal, Nigeria (University of Ibadan) and the U.K.(University of London).
Makward has published articles, books and book chapters on Contemporary African Literature and Oral Traditions. He is the former Chair of Department of African Languages and Literature, former Director of African Studies Program UW-Madison, former President of African Studies Association, the African Literature Association, and of the West African Research Association.
After retiring from UW-Madison, Makward helped set up the first university in his native Gambia, UTG, as Deputy Vice-Chancellor and Acting Vice-Chancellor(2002-2005).