Mandela Washington Fellowships have created a dramatic return on investment according to IREX CEO and president Kristin Lord in her recent article in The Hill.

In the article, Lord points out the enormous amount of social change occurring throughout Africa.   More than 20 countries around the world are holding elections this year and more than half are in Africa. Africa is also the youngest continent on Earth, with 200 million young

people between 15 and 24 years old. These young people are adding to the explosion of entrepreneurship, technological innovation, artistic creativity, and design across the continent.

Among these new leaders are the nearly 2000 young women and men who have been selected as Mandela Washington Fellows of the Young African Leaders Initiative (YALI) since 2014. These returned fellows are leaders and innovators in their organizations, institutions, communities and countries in local government, environmental organizations, mental health pioneers and parliament — among many others.

“Satir Bahati of Rwanda lost his sight to glaucoma in 2003 and had to give up his dream of being a surgeon.  Nevertheless, he went on to create Uwezo, which advocates for and trains disabled Rwandans, helping them find internships and ultimately permanent jobs.

Munya Dodo is a Zimbabwean television director and producer who created TVYangu.com, an award-winning video-on-demand and content aggregator, which is curating some of Africa’s best social media content, in spite of the crackdown recently issued by 92-year-old President Mugabe.

Mutaru Muqthar from Ghana is combatting terrorism by working with youth groups to counter violent extremism and radicalization.

Sherry Tumusiime not only launched one of the best e-commerce sites in Uganda (www.thebabystoreug.com), she is also CEO of the Zimba Group, a  small business software company, and ZimbaWomen, which seeks to provide full tech support to women entrepreneurs.” 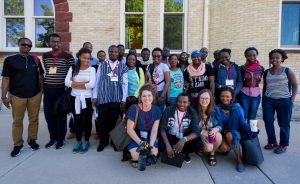