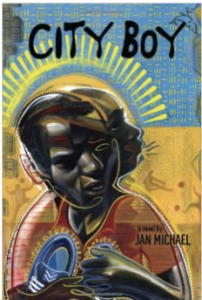 Description: After Sam’s mother dies of AIDS, Sam’s grief is compounded by culture shock when he goes to live with his aunt’s family in the small Malawi village where his mother grew up. He and his mother had lived in the city, where he attended private school and lacked nothing, from the latest computer game to fancy running shoes. Those shoes, and the few books he brought with him, become a symbol of his difficulty adapting to village life. Sam’s cousins and the other boy who lives with his aunt are fascinated by Sam’s things. Sam does not want to share, but in his aunt’s spare home sharing is a way of life. His aunt is loving, firm, and clear on her expectations for Sam as his painful struggle to fit in is complicated by his sense of loss and sadness. Sam’s changing living situation and the details surrounding it, from the AIDS crisis to the contrast between urban and rural living, are made accessible and understandable for readers in this affecting story.  © Cooperative Children’s Book Center

Description: In 2001, a drought hit the country of Malawi in sub-Saharan African. “Without water, the sun rose angry each morning and scorched the fields, turning the maize into dust. Without food, Malawi began to starve.” William Kamkwamba was fourteen at the time, living in the village of Wimbe. Fascinated by machines, William was inspired by a diagram of a windmill in a library book to scavenge parts from the junkyard: “a broken bicycle, rusted bottle caps, and plastic pipe, even a small generator that powered a headlight on a bike.” He made them into a windmill, mounted it on a tower, and turned on a light with the wind. William and coauthor Bryan Mealer recount his efforts in this rich, expressive telling that concludes, “Light could not fill empty bellies, but another windmill could soak the dry ground, creating food where once there was none …” An essay at story’s end provides additional information on how William built another windmill in 2007 that he used to power a pump that watered his family’s garden year-round. Elizabeth Zunon’s oil paint and cut-paper illustrations are a distinctive and appealing accompaniment to an inspiring account.  © Cooperative Children’s Book Center

Author: Deborah Ellis (2004)
Type: Young-adult novel
Description: Binti and her siblings are orphaned when their father dies of AIDS. Split up and sent to relatives all over Malawi, they suffer increasing hardship. Binti learns the hard way what is most important in life, and is forced to take a hard look at her own. Historically and culturally sensitive, The Heaven Shop is respectful and informative. It doesn’t shy away from dealing with difficult issues, nor does it sugar coat them. Instead, the story deals realistically with customs of inheritance without making gross generalizations or judgments about what is done. It is easy to envision life in Malawi because the story is filled with rich description of the Malawian landscape and day-to-day life, from second-hand clothing being sold on the side of a road to lines of women and children waiting to get water in rural areas. © Africa Access

Author: Beverley Naidoo & Maya Naidoo (2003)
Description: In South Africa, Lindi and her brother go to the sea with their grandmother, taking with them a little wooden boat their grandfather has made. They quickly make a new friend and play together with the boat in the sea and then have a picnic. No one notices the sea creeping in until it has taken their boat away. The children are upset but find a special shell to take home for their father to make up for the loss of the boat he had given them. He says he can always make another boat but that he could never make anything as beautiful as the shell. © Africa Access

Author: Allan Stratton (2004)
Type: Young-adult novel
Description: Sixteen-year-old Chanda Kabelo has secrets. She loves school and dreams of winning a scholarship one day, but people are dying around her. Everyone is afraid to say why, but Chanda knows: it’s because of AIDS. Chanda’s Secrets takes place in a nameless country that accurately resembles a place where over a quarter of the population is living with HIV. Chanda’s struggles are similar to millions of other children living in Sub Saharan Africa. Having lost her father, stepfather, three older brothers, sister and several community members, Chanda quickly moves from the playful ignorance of youth to an adult life, even though it is difficult for her to understand some of what is happening around her. Though the Hollywood ending makes the story slightly unrealistic, Chanda gives a face and a story to connect teen readers with the statistics they hear in the news. © Africa Access

Author: Archbishop Desmond Tutu and Douglas Carlton Abrams (2013); A.G., Ford (illus.)
Description: Desmond was very proud of his bicycle. He was the only child in the whole township who had one, and he couldn’t wait to show it to Father Trevor.  When Desmond takes his new bicycle for a ride, his pride and joy turn to hurt and anger when some boys shout a very mean word at him.  No matter what he tries, Desmond can’t stop thinking about what the boys said.  Based on a real life experience from Archbishop Desmond Tutu’s own childhood in South Africa, this book eloquently shows a child’s realization that true forgiveness comes from within and that all people deserve compassion, whether or not they say they are sorry. © Author

Author: Beverley Naidoo (1995)
Type: Young-adult novel
Description: No Turning Back addresses the problems of post-apartheid South Africa. Although a new regime governs the country, changes in the economy, society, and education have not filtered down to the poor as quickly as anticipated. Young adolescent boys still find that poverty and crime in the townships are too much to endure. Sipho like other boys flees Soweto and goes to middle class neighborhoods in Johannesburg where he can live with a group of young sidewalk entrepreneurs. His payment is in kind (food, lodging, and schooling) rather than money. Despite his improved lifestyle, this arrangement keeps him still dependent. Finally, Sipho goes to a shelter where he can live and attend school, he returns to Soweto only to visit his mother. No Turning Back contains a hopeful message for South African youth, portraying Nelson Mandela’s vision through Sipho for a more tolerant country. © Africa Access

Author: Sindiwe Magona (2006)
Type: Autobiography
Description: This is powerful and widely acclaimed autobiography that provides a vivid, personal snapshot of what it was like to grow up under apartheid in South Africa. Her life exemplifies the challenges and defeats as well as the power of personal courage and determination as this book introduces readers to her early years as a child, and later as a student, a teacher, a domestic worker and a single mother. © Africa Access 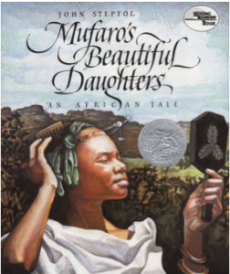 Author: John Steptoe (2008)
Description: Steptoe’s last offering is an adaptation of a Xhosa tale from South Africa. Steptoe has changed the setting of the story from Xhosa land to old Zimbabwe. As in the old tale, the focus is on sisters with opposite natures. One is kind and gentle, the other bad-tempered and selfish. Each hopes to be chosen by the king to be his wife. In addition to learning that good behavior is rewarded and ill deeds are punished, children soak up the atmosphere of rural and city life in an ancient African kingdom. The book can serve as a useful means of introducing children to the variety of architectural structures in ancient Zimbabwe. Thatched houses and massive stone structures are both featured in the illustrations. The drawings of buildings and people are detailed and stunningly realistic. Storytellers searching for a good read aloud will find this book ably fills the bill.  © Africa Access

Description: Fifteen-year-old Deo and his older, developmentally disabled brother Innocent barely survive a massacre by government soldiers in their Zimbabwe village. In the aftermath, they head for South Africa, making the dangerous crossing into that nation with a guide and a handful of other refugees. They eventually end up in Johannesburg, where they are taken in by a small group of refugees living inside a bridge. Deo’s world is shattered a second time when anger and xenophobia explodes in a series of violent attacks against refugees. Jump ahead two years and he is living on the streets of Cape Town, getting high as often as he can to keep memories at bay, when he’s spotted by a coach of the South African Street Soccer Team. Soccer had been one of the joys of Deo’s life in Zimbabwe. Now he is given a chance to train with and try out for the team that will represent South Africa in the Homeless World Cup. But in order for this group of young men and women comprised of native South Africans and refugees from other African nations to become a South African team, they must revisit their painful pasts together, sharing their stories as a means of understanding how much they have in common. Told in Deo’s compelling voice, author Michael Williams’ gripping and ultimately uplifting story illuminates the strength and vulnerability of the human spirit while skillfully navigating and ultimately challenging xenophobia in South Africa. Williams provides additional information about xenophobia in South Africa and the Homeless World Cup in author’s notes.  © Cooperative Children’s Book Center