Description: After Kedi’s teacher shares his worries about people in New York City—his home–starving because they have no money for food, the young Bulu girl asks the adults in her village if they can help. But her community has so little it seems there is nothing they can do. Or is there? The next day, the villagers turn up at Kedi’s school with a small but significant offering of coins, explaining that “Our hearts would not sit down until we helped.” Mara Rockliff’s fictional story set during the Great Depression is based on an actual event detailed in her author’s note: In 1931 the mayor of New York City received $3.77 from Cameroon to feed the hungry. Rockliff’s note explains more about the Great Depression, and how she conjectured people in Cameroon may have heard about it from a teacher at one of the schools run by American missionaries. She also provides cultural details of a story she set among the Bulu ethnic group in the south of Cameroon, and concludes with examples of other instances when people in places around the world have sought to help strangers in need. Ann Tanksley’s illustrations provide a vibrant, arresting backdrop for Rockliff’s lyrical storytelling. © Africa Access

Description: In 2001, a drought hit the country of Malawi in sub-Saharan African. “Without water, the sun rose angry each morning and scorched the fields, turning the maize into dust. Without food, Malawi began to starve.” William Kamkwamba was fourteen at the time, living in the village of Wimbe. Fascinated by machines, William was inspired by a diagram of a windmill in a library book to scavenge parts from the junkyard: “a broken bicycle, rusted bottle caps, and plastic pipe, even a small generator that powered a headlight on a bike.” He made them into a windmill, mounted it on a tower, and turned on a light with the wind. William and coauthor Bryan Mealer recount his efforts in this rich, expressive telling that concludes, “Light could not fill empty bellies, but another windmill could soak the dry ground, creating food where once there was none …” An essay at story’s end provides additional information on how William built another windmill in 2007 that he used to power a pump that watered his family’s garden year-round. Elizabeth Zunon’s oil paint and cut-paper illustrations are a distinctive and appealing accompaniment to an inspiring account.  © Cooperative Children’s Book Center

Author: Elizabeth Alalou & Ali Alalou (2008); Essakalli, K Julie (illus.)
Description: Nora, a young girl of Moroccan heritage, hears a story about her father’s childhood in a small Berber village in the Atlas Mountains of southern Morocco while her father prepares her family’s usual Saturday dinner, couscous. She hears how her father and his family, and his village, lived through both drought and plenty in their agricultural region. Reflecting the contemporary realities of the Moroccan Diaspora around the world, the book suggests the passage of family history and tradition within a modern household. Elizabeth and Ali Alalou balance the two worlds without relying on sensationalism or an orientalizing of rural Morocco. Includes educational notes on Berber culture in Morocco. © Africa Access 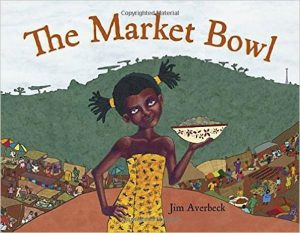 Description: Mama Cécile and her small daughter Yoyo make their living by selling bowls of their delicious homemade bitter leaf stew every day at the local market. When Yoyo is certain she is ready to make the stew on her own, she takes a few shortcuts. Mama Cécile declares the results only good for the goats. But proud Yoyo is determined to sell her stew, so she takes it along to market. She and Mama Cécile have asked Brother Coin to bless their market bowl, binding them to accept any fair price they are offered. When Yoyo is offered much less than she hoped for her own bowl of stew, she refuses to sell it, angering Brother Coin. It’s up to Yoyo to use her wits and her culinary skill—without shortcuts this time—to appease Brother Coin and regain the blessing for their market bowl. This clever, original story draws on the cultures and customs of Cameroon, and a recipe for bitter leaf stew, Cameroon’s national dish, is included at the back of the book. Although the story is timeless, details in the illustrations place it in a contemporary Cameroonian village. © Africa Access

Description: When a child and his grandma dig up a worm while gardening, the boy’s first instinct is to throw it away. “ ‘Throw it away?’ Grandma looked horrified. ‘Would you throw away one of your friends?’ ” When he replies that it’s hard to befriend a creature when you “can’t even tell which end is which,” Grandma seizes the moment to deliver a lesson on the value of earthworms. In a conversational style, she explains worms’ physiology, diets, function as soil aerators and fertilizers, and the dangers they face from predators. She dispels a myth (bisected worms don’t turn into two worms) and demonstrates how to bring worms to the surface with a simulated rainfall. By the time they move on to the next gardening chore, Grandma has cultivated a newfound respect for worms in her grandson. The pencil and gouache art both illustrates and amplifies the text, with cross-sections offering a worm’s-eye view, while informational tidbits and dialogue bubbles embellish the main storyline.  © Cooperative Children’s Book Center