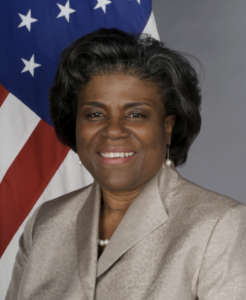 Ambassador Linda Thomas-Greenfield has been heralded as one of the most dynamic and effective diplomats of her time and one of the most respected leaders at the State Department. Her career in the U.S. foreign service spanned 35 years, most recently as assistant secretary for African affairs in the Obama administration.

“She began her career as a scholar of Africa at the UW Department of Political Science and carried that passion and expertise into her long, distinguished diplomatic career, where she broke racial and gender barriers, excelled in diverse key areas and oversaw several major foreign policy initiatives, while ascending to several senior leadership positions at the Department of State,” writes J. Stephen Morrison, senior vice president at the Center for Strategic and International Studies in Washington, D.C., in a letter supporting her nomination.

Thomas-Greenfield earned a master’s degree in public administration in 1975 from UW–Madison with her advisor Crawford Young, and was bestowed an honorary degree in 2018.

Beyond her Africa career specialization, Thomas-Greenfield played an important role in humanitarian and refugee affairs, earning praise for her work in Pakistan, Kenya and Geneva. She served as director general of the foreign service, a position that also includes the title of director of human resources. She led a team of approximately 400 employees who handled the full range of personnel functions for the State Department’s workforce of 70,000 employees. Thomas-Greenfield was ambassador to Liberia from 2008 to 2012, a critical period of reconstruction in the country after nearly 15 years of conflict.

She is now a distinguished resident fellow in African studies at the Institute for the Study of Diplomacy at Georgetown University. She also is senior counselor at Albright Stonebridge Group, a global strategic advisory and commercial diplomacy firm in Washington, D.C.

For more information on Ambassador Thomas-Greenfield’s position in the Biden administration read this article.