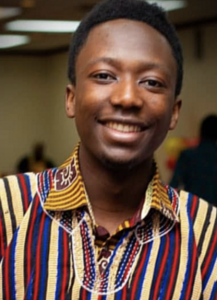 Sheriff Issaka is a King-Morgridge Scholar from Ghana who recently won the African Studies Program’s Racial Justice Award. He is a Junior, majoring in Computer Science with African Studies and Entrepreneurship certificates. Sheriff developed this ambitious resume in his efforts to fulfill his dream of “making a positive impact in the lives of as many people as [he] can.”

Sheriff describes his project, AI4Afrika, for which he won the Racial Justice Award, as seeking

To create a welcoming space for individuals, with a focus on people of color, to collaborate and work together on developing and deploying more inclusive and impactful technologies. The primary outcome of this project is to spark a long-overdue process of consciously trying to introduce more tech-savvy individuals into an African/ Black space as a way to create a healthier community, help check issues of racial inequalities in technology on and off the UW campus, and to spread the Wisconsin Idea.

Since he was young, Sheriff has found technology fascinating, and he has long imagined how he can develop a tool with which “Africa as a whole could use to emerge as the power it’s meant to be.” Sheriff sees computers as central to problem-solving and is interested in the power of artificial intelligence (AI), keeping an eye toward AI in the Global North, where the US, China, and Germany are making incredible strides. He explains that AI development is in its early stages on the continent, but Sheriff envisions immense potential. “AI is not just about the technology,” Sheriff establishes,” but [it’s about] who creates it.” He believes that Africans, the African diaspora, and their ideals should be a part of AI and technological innovation, and he intends to actualize this himself.

As an undergraduate student in the King Morgridge Scholars Program, Sheriff has found various networking opportunities and resources for knowledge acquisition. Each year the program selects six students from around the world to solve global issues related to poverty. Sheriff recalls, “Growing up, I’ve seen poverty firsthand, and it’s a human rights violation.” Technology, he insists, can help mitigate this.

Sheriff has developed AI4Afrika at UW under the guidance of Professor Reginold Royston. Together, they evaluate technology, especially artificial intelligence, curious about how it evolves, who the players are, and how it’s working or where it needs improvement. Professor Royston has put Sheriff in contact with AI4Afrika (http://www.ai4afrika.com/), “a group of brilliant people of African descent and others” who identify with the diasporic and continental Africans’ struggle. These connections have helped Sheriff cultivate visions for various projects, and he is now putting together a team of software developers and innovators to help solve global problems.

Sheriff is an interdisciplinary minded man. He hopes to bring humanists, artists, social scientists, and scientists together to theorize and problem solve. Some of the projects he hopes to invent include software capable of translating thousands of African languages. He also hopes to create software that will optimize internet data usage in regions where the cost of the internet is astronomically high.

Sheriff is a creative and precise thinker and the wisdom he can share in one Zoom chat underscores how he is a person ahead of his time. If you would like to contact Sheriff and learn more about his world-changing ideas, you can find his information below.