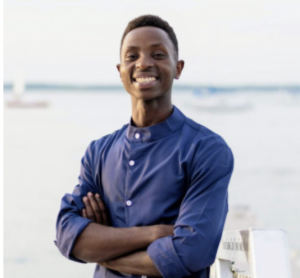 The African Studies Program is excited to publicly appreciate Joel Baraka. Joel is a 4th-year undergraduate civil engineering major, with a creative approach to education. Joel has worked with our African Studies Program for the past year, as well as volunteered with the Reach Program (International Student Services) as a cross-cultural speaker throughout his undergraduate experience.

We thank Joel for his educational outreach work, wherein he facilitates cultural exchange conversations with students in the Madison area. He shares the reflections of his academic journey both in Uganda and South Africa where he attended primary and high school respectively, with elementary and high school students. The schools he has visited and students he has talked to, are mostly interested in the South African concept and Zulu phrase, UBUNTU – which translates into I am, because you. “This philosophy recognizes our interdependence as humans and the idea that what you do have an effect on me and vice versa.” Joel’s university outreach work is only the tip of his resume.

In the year 2016, when Joel was a senior in high school, he set out to develop his educational board game, 5 STA-Z, that would bring Ugandan primary school curriculum and age-appropriate fun together. Joel’s life and schooling experience in a Ugandan refugee camp shaped his ideas about different types of learning experiences possible beyond the standard curricula he followed.

Joel’s teachers perpetuated an educational culture rooted in focus and obedience, which, he argued, stifled the creative potential students could benefit from. Joel explains, “children like to play. Even if their parents have future goals for them—doctor, lawyers, or what have you—it’s hard for young children to conceptualize” these long-term agendas.

Joel set out to develop a tool that was both age-appropriate and that would allow them to conceptualize the aspirations their parents and teachers had for them. Central to 5 STA-Z are questions, such as “how can we help students learn,” given their short attention spans? How can teachers support these children “without over-looking their need for games, having fun in school, and re-engaging focus when they lose it.” 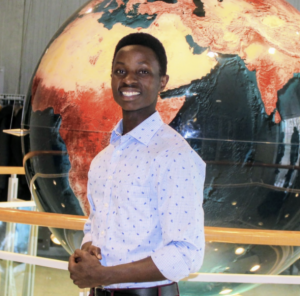 For Joel, it wasn’t complicated to develop a fun game, but he had to get creative and reflective about working in the content. He started testing his hypotheses in his first year of high school (2016). While his initial efforts felt compromised by limited resources, Joel has collaborated with teachers back in Uganda, professors, and fellow students at UW to continue improving the 5 STA-Z. With the recent COVID-19 crisis that shook the traditional methodology of conducting classes – forcing schools to close and sending children home, Joel ran a GoFundMe to raise support for school going children in his community. With more than $10,000 in donations, Joel and his team at My Home Stars have worked with two partner organizations to support 20 educators and over 900 children with access to learning resources through 5 STA-Z academic games. He has also been working with teachers and students to learn from their feedback and shift the games as needed. For Joel, knowledge is constantly evolving, so his approach is both flexible and adaptable.

At first, Joel instituted his education tool at Kinakyeitaka – his former primary school he attended while still in the refugee camp, but he has since moved into four schools and hopes to serve a total of 10 schools in various regions of Uganda by the end of this year. He is currently in the process of raising $5,000 to help him purchase a printing machine that will allow him to produce more games at a more reduced cost.

Joel’s work has been featured in several prominent articles, most recently in the Wisconsin Street Journal. You can learn more about his work and 5 STA-Z on his website.