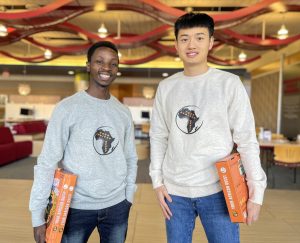 Joel Baraka and Anson Liow are engineering students in the College of Engineering at the University of Wisconsin-Madison. Anson earned a bachelor’s degree in civil engineering last May and is currently pursuing a master’s degree in Construction Engineering and Management, and Joel is a super senior graduating this May. They have a shared interest in video games and they have collaborated in designing two board games. Joel and Anson believe that table games are a great way to strengthen existing and form new friendships, as well as a fun and engaging way to learn and acquire knowledge.

Congratulations on winning Artivism Student Action Program! Can you tell us about this award and how you became involved?

The Artivism Student Action Program (ASAP) Award funds student-led projects that demonstrate strong intersections of art and activism. This is part of the commitment and vision of equity and inclusivity within the University of Wisconsin community. The call for applications came at the time, we were developing Your African Quest, a card game that takes players on a journey to learn about and explore the African continent through five major categories: African countries and cities, food, nature, people, and the continent’s diverse cultures. The game can be played by three to eight players, aged eight years and above from any background with curiosity to learn about Africa’s diversity. With Your African Quest, not only do we hope to raise awareness about Africa’s rich diversity in an interactive, fun, and engaging way but also get to share some of our work with people who have supported our work.

How did your past experience prepare you for the project and what motivated you?

We’ve always been interested in game development. Our education at the University of Wisconsin-Madison influenced the creation of My Home Stars, a Ugandan social enterprise that develops educational games based on Uganda’s primary education curriculum for school going children. The 5 STA-Z, a fun and engaging educational board game based on the Ugandan curriculum, was the first game we worked on together. Game-based learning is still a new approach in Uganda, but we believe that by utilizing a student-centered learning approach and integrating play in classrooms, games can enhance children’s school experience.

We were motivated to create Your African Quest for two reasons. The first was a GoFundMe campaign launched in 2020. When the first wave of the COVID-19 pandemic struck, a number of schools in Uganda’s Kyangwali refugee camp closed, denying hundreds of children access to educational resources. It was heartbreaking to see the community and schools struggle to provide learning opportunities for children. As a result, we launched a GoFundMe campaign to raise $10,000 in four weeks to produce the five STA-Z game packages that children can use at home and support educators who would be facilitating this remote learning. We were humbled to see how our friends and the Madison community came out in force to support us. While we were disappointed that we were unable to provide the five STA-Z games to those who donated or supported our campaign, this scenario sparked an idea. We wondered what it would be like to create a fun educational card game that could be shared with the Wisconsin community and beyond.

Joel’s previous experience working with schools in Madison through the African Studies Program was the second motivator. Joel worked as a cross-cultural speaker as an African Studies Outreach Scholar, sharing information about Africa’s diverse cultures with K-12 students in Madison. This prompted schools and students to learn more about Africa. Different schools contacted us with varying requests, but everything revolved around the African continent’s rich diversity, including Africa’s various countries and cities, its people, culture, food, and the magnificent physical features of the continent. This was an excellent starting point for our new card game, Your African Quest. We finished the prototypes for the game by the summer of 2021, and we spent part of the summer testing them with close friends here at the University of Wisconsin-Madison.

How does the project contribute to learning more about Africa?

Your African Quest will be great learning for not only school-age children in Madison and across the United States, but also for families of all backgrounds who have always wanted to learn and explore more about Africa. Africa continues to have the most fascinating history and diversity, but it is often overlooked, misunderstood, and misrepresented. It is critical to challenge negative stereotypes about the African continent in order to create inclusive and welcoming learning environments that celebrate differences. We have always believed that the Your African Quest card game is a product with a strong social cause that can bring people together to learn about the diversity of the African continent.

What are some of the challenges you have faced in producing knowledge about Africa and what advice do you have to students intending to work on a project about Africa? 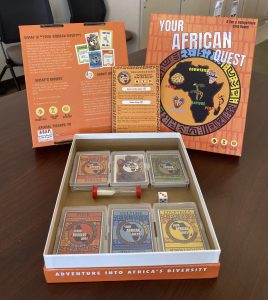 One of the most difficult challenges we faced was determining what was important and would work well within a card game setup for users who were unfamiliar with the African continent. It’s impossible to condense everything about the continent’s 54 countries or 2000+ languages into a single game. Instead, we attempted to present a representative image of the continent by categorizing the content into five distinct Quest Card categories: countries/cities, food, people, nature, and culture.

As students and entrepreneurs, we advise students who want to collaborate and design projects not to be afraid to fail. If you don’t try, you’ll never know if your idea will succeed or fail. And each failure only adds to your knowledge and experience, eventually leading to success. This has been true in our work with My Home Stars in Uganda and here in the United States. We never stop experimenting with new ideas. Mistakes and failures have provided us with invaluable experience.

How are you preparing for the product launch?

With the ASAP award and collaboration with the African Studies Department, we are currently running pilots with four Madison K-12 schools, and close friends. We are focusing on improving the content, game mechanics in the areas of replayability, equal opportunity to win, the tension in play, and general appeal. We should be done with this process sometime in April and any time after this we shall be ready to release the game to the public.

We are currently looking for about five families to participate in our playtesting. We will work to get you a copy of the game once we receive your information, and you will have about a month to use it and provide feedback to us. Not only will you be among the first to experience Your African Quest, but you will also have the opportunity to collaborate with us and affect change before the game is released to the general public. For those interested, use this link to sign up.