*NOTE: Due to inclement weather on the east coast, Sean Jacobs is unable to join us this week. This event has been cancelled. We hope to welcome Sean Jacobs back to campus in the fall! 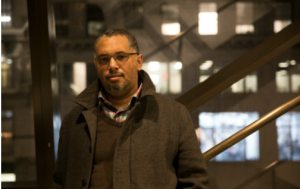 Sean Jacobs will analyze recent political protests in South Africa, around symbols, public space, curriculum, race, struggles over free public higher education, among others and what they mean for research and scholarship more broadly in African Studies.

Sean Jacobs holds a Ph.D. from Birkbeck College, University of London, and has held fellowships at NYU, Harvard University and The New School.  In 2009, Sean founded Africa is a Country, a site of media criticism, opinion and analysis. He has published widely in academic settings as well as in popular and mainstream media publications, including The New York Times, The Guardian and Die Volkskrant. His research interests revolve around the interaction of politics and popular culture. Sean is a native of Cape
Town, South Africa.