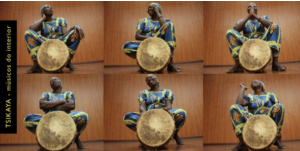 Tsikaya – Músicos do Interior is a music project that invites composers and musicians in the rural areas of Angola to participate in a digital platform enabling their music to be promoted and shared with a global audience. Field recordings have been performed by local teams in several provinces contributing to a growing digital archive of traditional as well as contemporary folk music. This talk is aimed to give an image of what is being produced and what factors influence music today in the interior of Angola.

Victor Gama (Angola/Portugal) is a composer, performer, designer of contemporary musical instruments, and Angolan musicologist by heart. He holds a BSc in electronics engineering and an MA in Music Technology from the Sir John Cass Faculty of Art, Architecture and Design in London and is currently Visiting Artist at Stanford University’s CCRMA. Gama’s work addresses the relationship between instrument building and composition, while using new technologies and the creative practices of Africa. He initiated the Tsikaya project in Angola in 1997.