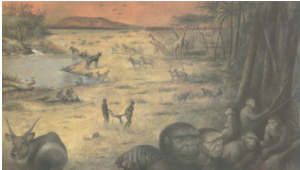 Humanity in the Pleistocene, or “Just another large mammal”?

How human was humankind prior to 10,000 years ago, and how do we know? Paleoanthropologists debate these topics vigorously, with views on the antiquity of humanness ranging from only several tens of thousands of years to two million years. In this presentation, new archaeological evidence of hunting success through time, including contemporary Hadza hunter-gatherers, early Homo sapiens in South Africa, and early Homo erectus in Tanzania, is used as a measure of foraging capability and related social behaviors in the Pleistocene.

Henry Bunn has been a professor at the University of Wisconsin-Madison since 1982. He has conducted paleoanthropological research in Africa for over 40 years, mostly in Tanzania and Kenya, but also in Somalia, Botswana, and South Africa on the evolution of human diet and foraging behavior. His current research involves the behavioral ecology of Hadza hunter-gatherers, archaeological and paleontological excavations at Olduvai Gorge and Laetoli, and analysis of prey animal mortality patterns from African archaeological sites as evidence of hunting behavior.