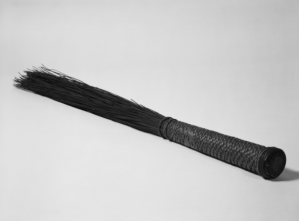 Flywhisks, Catastrophe Logic, and Colonial Nervousness in the Congo

What does nervousness have to do with a colonial biopolitical state? My history of Congo’s Equateur could well have taken an easy form, that of event-aftermath. It could have made suffering its central subject, given the widespread childlessness in Congo’s forests following iconic imperial violence during this colony’s early rapacious years. Yet instead of one trajectory about warfare and medicine, I began tracing two crossed lines of evidence about power, nervousness, and words. As flywhisks suggest, vernacular therapeutic motion surfaced with suggestions of clearing, ridding, ousting. Concepts, like reverie and repetition, became working materials. Yet narrative adhesion came from figurations and stories enabling hints of anger and jauntiness, but also horizons, dreams, and interior points of view.

A student of Jan Vansina, Nancy Hunt received her doctorate in History from UW-Madison in 1992. Her overhauled dissertation, *A Colonial Lexicon: Of Birth Ritual, Medicalization, and Mobility in the Congo* (Duke 1999), received the Herskovits Prize in 2000. She has published essays on African abortion novels, Congolese comics, health and healing, reproductive medicine, and camouflaged polygamy in such journals as the Journal of African History, Past & Present, Africa, and History Workshop Journal. *A Nervous State: Violence, Remedies, and Reverie in Colonial Congo* is forthcoming in 2015 from Duke. Next year, she will be a Fellow at the Institut d’Etudes Avancées in Paris.

This lecture is supported by a UW-Madison Mellon Foundation grant for the advancement of area and international studies.