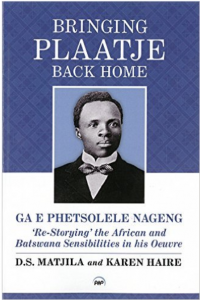 Virtually unsung South African hero, Sol T. Plaatje, started what Mandela finished 100 years later. Founder member of the ANC, Sol T. Plaatje (1876-1932), was a man of letters by his gifts but a politician by necessity. Using the spoken word and the pen he raised the world’s awareness of the plight of Black South Africans. Traveling to the U.S., he rubbed shoulders with WEB DuBois and spoke to Garvey’s UNIA. His words are astonishingly relevant today in the U.S. where racial upheavals show that the specter of racism and white supremacy still haunts us…

Speakers and writers, partners in Plaatje research since 2006, DS Matjila of South Africa and Karen Haire of Ireland and the U.S. bring Plaatje back to the U.S. they wrote Bringing Plaatje Back Home, published 2014, for scholars and tertiary students and collaborated as editors and translators on Lover of His People, A Biography of Sol Plaatje, which won the 2014 Translation Award from the English Academy of South Africa. Haire is an Associate Professor at Principia College and Matjila is an Associate Professor at the University of South Africa.