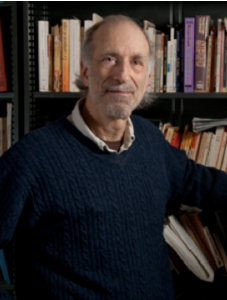 How does African cinema trouble the order of World Cinema? The construction of the category of World Cinema comes at a price: it produces order and simultaneously detritus. The detritus is seen in relationship to the value “World Cinema” generates by admitting “world films” into its lists, into what counts as worthy of being a “world” film and not just a local film. And simultaneously it pushes us to ask, what qualifies as African cinema. The three questions, what is a “real” film, an African film, and a global film lead to the key issue, what is the relationship between African film and World Cinema, and how does a given definition of what is an acceptable film, much less a global film, drive that relationship?

Kenneth Harrow is a Distinguished Professor of English at Michigan State University with specializations in African literature and cinema. He has taught in the Université de Yaounde and l’Université Cheikh Anta Diop in Dakar. He is the author of Thresholds of Change in African Literature (Heinemann, 1994), Less Than One and Double: A Feminist Reading of African Women’s Writing (Heinemann, 2002; trans. as Moins d’un et double, L’Harmattan, 2007), and Post-colonial African Cinema: From Political Engagement to Postmodernism (Indiana U P, 2007). His latest work Trash! A Study of African Cinema Viewed from Below, was published by Indiana University Press in 2013. He has edited numerous collections on such topics as Islam and African literature, African cinema, and Women in African cinema. He has served as president of the African Literature Association and received their first Distinguished Member Award in 2009 and the Distinguished Africanist Award at the Toyin Falola Annual Conference at the University of Texas in 2011.