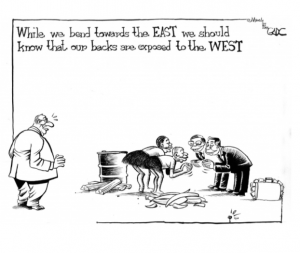 Description
Through a selection of his acclaimed cartoons on China’s emerging relationship with Africa, Gado, a leading Kenyan cartoonist, explores the most momentous new direction in Africa’s international relations since independence.

Gado (Godfrey Mwampembwa) is the most syndicated political cartoonist in East and Central Africa. Since 1992, he has been an editorial cartoonist and illustrator with the Nation Media Group. A regular contributor to New African (UK), Courier International (France), Business Day and Sunday Tribune (SA), his work has also been published in Le Monde (France), Washington Times (US), The Guardian (UK), and the Japan Times. He is the author of four books: a short story comic book titled Abunuwasi (1996), and collections of cartoons, Democrazy! (2000), The End of an Error, and the Beginning of a New One! (2006), and Crisis…? What Crisis?! (2012).

In addition to cartooning, Gado is also Co-Founder and Executive Chairman of Bunimedia, a multimedia production company based in Nairobi, Kenya. He is the Creator and Producer of The XYZ Show, Africa’s first puppet political satire, and an Executive Producer of Africanism 101, a series of in-depth documentaries on major socio-political issues that touch Kenya today.

Gado is a 2007 Prince Claus Laureate. He is also a winner of Kenya National Human Rights Commission Award in Journalism in 2005 and 2007. In 1999 he was named Kenya Cartoonist of the Year. He has exhibited his works in Tanzania, Kenya, France, Norway, Finland and Italy. A painter in oil and watercolors, Gado is a member of Kenya Union of Journalists (KUJ), the Association of East African cartoonists (KATUNI), Cartoonists and Writers Syndicate (C&W) and a Board Member of Cartoonist Rights Network (CRN).