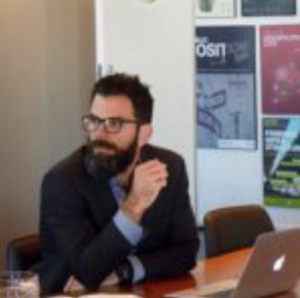 “Africa, the Anthropocene, and the end of (Neo-)Liberal Time?”

This paper will interrogate what I am calling ‘narratives of the Anthropocene’ as they are constituted within discourses on climate change. I argue that the dominant narrative structure of much literature on climate change tends to flatten out the experiences of environmental shifts brought about by the Anthropocene; this is the new geological age of the Earth in which humans have become the principle environmental and geological force on the planet. Rather than interpretations such as Bruno Latour’s “common geostory” for describing the global experiencing of climate change, I will argue that in African imaginings of the environmental apocalypse, the texture of the Anthropocene – as a periodizing and spatializing structure – are more variegated and less universalising. The paper will look at the 2009 short film Pumzi by Kenyan director Wanuri Kahiu, for the ways in which, from the perspective of Africa and by extension from the Southern Hemisphere, the dominant discourse of the Anthropocene, in its universalizing and homogenizing of climate risk, is in many ways a (neo-) liberal construct which ignores both the impact of the histories of colonization as well as the postcolonial present realities of geographical precarity.

Kirk Sides completed his dissertation in 2014 in the Department of Comparative Literature at UCLA; a project that explores a transnational intellectual history of apartheid in South Africa. By looking at the influence of both US technologies of racial governance – such as Jim Crow and the Native American Reservation system, as well as German anthropology, the project situates South African apartheid as part of a global conversation on race and racial governance. As a Postdoctoral Research Fellow in South Africa, Kirk’s research continues to look at the commonalities and conversations between the US and South Africa. By looking at discourses on both slavery reparations in the US and reconciliation in South Africa, his project thinks about both the racial politics of national memory as well as their aesthetics, but also about new forms of Atlanticism which engage with the history of the southern US in trajectories of south-south exchange. Kirk lives and works in Johannesburg, and has taught in the US, South Africa, and Germany. Currently he is working on a book manuscript entitled Anthropologists and Storytellers: Race, Creolization and the Ecological Imaginary in Twentieth Century South African Literature, as well as an edited volume with Achille Mbembe, which is a retrospective of nearly a decade of writing in The Johannesburg Salon, an online publication of cultural, literary and social science analysis and theory from the Southern Hemisphere.