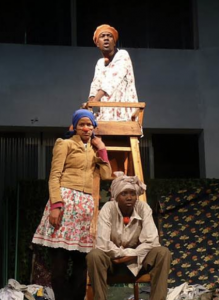 Theater and Social Vulnerability in Mozambique

This paper is the result of research on theater that Madureira conducted in Maputo, Mozambique between February and December 2010. The original aim was to understand how the sustained and diverse performance culture that has thrived in Mozambique since the early 1980s entails a novel and effective mode of exercising citizenship. Madureira wanted to gauge the extent to which, for both spectators and theatre workers, drama constituted a powerful form of political participation. Ultimately, he wished to propose that Mozambican theatre opened up spaces for the negotiation and re-articulation of ethnic, class and gender identifications both against and alongside dominant nationalist discourses. But in the course of investigation Madureira was compelled to rethink his hypotheses. In the paper he will be presenting, Madureira will try to explain why he needed to revise the original hypothesis and will then attempt to broach an interrogation of how (and indeed whether), in the course of Mozambique’s tumultuous recent history, theater has succeeded in catalyzing, or at least symbolizing, social change and political participation in rural and peri-urban zones/

Luis Madureira’s major areas of specialization include Luso-Brazilian colonial and post-colonial studies, as well as Modernism and Modernity in Latin America, Africa and the Caribbean. He has written two books, Imaginary Geographies in Portuguese and Lusophone-African Literature: Narratives of Discovery and Empire (2007), which studies figurations of empire, nation and revolution in Portuguese and Lusophone African literatures, and Cannibal Modernities (2005), a reexamination of the Brazilian and Caribbean avant-gardes from a post-colonial perspective. He has published several articles on topics ranging from Luso-Brazilian literature and cinema to early modern travel narratives and post-colonial theory. His current research focuses on Mozambican theatre and the politics of time in contemporary Lusophone fiction.