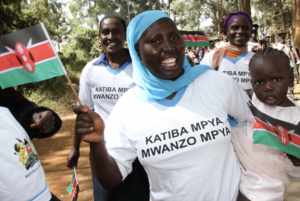 Women’s movements seized on the end of conflict and unrest in Africa over the past two decades to advance a women’s rights agenda through peace accords, as well as constitutional, legislative, and electoral reforms. This talk, which draws on recent fieldwork in Kenya, provides comparative perspectives on this phenomenon, with a focus on Kenya’s 2010 constitution.

Aili Tripp has taught at UW-Madison since 1992 in the Departments of Political Science and Gender and Women’s Studies. She has published numerous books and articles on women’s movements in Africa and internationally, global feminism, gender and politics in Africa and globally, and on women in post-conflict African countries. Tripp recently completed a book entitled, Gender, Power and Peacemaking in Africa. She co-edits a book series with Stanlie James on Women in Africa and the Diaspora for the University of Wisconsin Press. Born in the UK, Tripp has lived 15 years in Tanzania and has dual citizenship in the US and Finland. Her research is based on fieldwork in Tanzania, Uganda, Liberia, Angola, and Kenya. Recently she served as president of the African Studies Association.