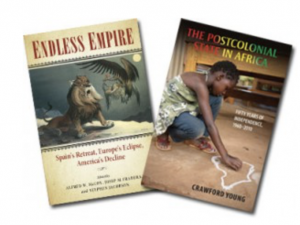 Introductions and moderation by Francisco Scarano, professor of Hisotry and director of the Latin American, Caribbean, and Iberian Studies Program.

What makes great empires topple, how do societies emerge from the shadow of colonialism, and how might this imperial past presage our global future? Join Professor Alfred W. McCoy (History) and Professor Crawford Young (Political Science) in a special discussion of two recently released books exploring the legacies of European and U.S. imperialism in Africa, Southeast Asia, and Latin America–both in shaping our political present and influencing the future trajectory of U.S. global power.

In a sweeping, authoritative analysis, Young traces the political itineraries of the 53 African states in the first half-century of independence. He identifies three cycles of optimism, even euphoria, followed by phases of disappointment. For the first three decades of independence, he finds, newly independent states followed largely parallel paths. Only since 1990 have the trajectories widely diverged, from the positive outcomes of a Ghana to the two decades of stateless disorder in a Somalia.

Key indices point to a decline in U.S. global power–emergence of rival powers, a series of costly military misadventures, a declining share of world GDP, loss of once-cooperative subordinate elites, and an erosion of scientific supremacy. During a decade of pacification in Afghanistan, however, the U.S. has begun fusing biometrics, cyberwarfare, and a triple-canopy aerospace shield into a robotic information regime of unprecedented power that may represent its best bid for maintaining global dominion in the face of waning economic influence.