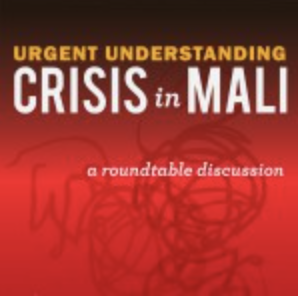 UW-Madison experts lead a round table discussion to help sort out the complexities of recent events in Mali.

Free and open to the public.

Professor of Agricultural and Applied Economics
University of Wisconsin-Madison

Jeremy Foltz is a professor of Agricultural & Applied Economics who specializes in the economics of developing countries especially in Africa and the economics of technology adoption. He holds a B.A. from Yale University and an M.A. and PhD. from University of Wisconsin-Madison. Jeremy served as a Peace Corps volunteer training well-diggers in a small village in rural Mali from 1987-1989 and returned to Mali as a Fulbright researcher for a sabbatical year in 2008. He is currently working on a number of projects in Mali including research on the determinants of petty corruption, the adoption of new agricultural technologies, and the effects of climate change on infant and adult mortality.

Leif Brottem has been working on West African development issues since 2002, including over three years living in rural Benin and, later, Mali. He is currently a PhD Candidate in the Department of Geography where he is completing a dissertation on pastoral mobility, access to resources, and political decentralization. Since September of last year, he has also been working as a consultant on the USAID Adaptation and Resilience to Climate Change in West Africa project. Most recently Leif co-authored the New York Times opinion piece, “Looking Ahead in Mali,” with Scott Straus, Professor of Political Science and International Studies.

Thierno Hady Diallo was born and raised in Bamako, Mali. After high school he secured a scholarship to study at the Agriculture Institute of Kishinev in the Republic of Moldova where he earned an MS in Agronomy in 1992. For the next three years he lived in the Normandy region of France, where he trained and worked on dairy and crop farms. In 1995 as a government exchange student he moved to Sheboygan, Wisconsin, to focus on farm management, animal husbandry, dairy and crop productions. Later Mr Diallo took short courses on Precision Agriculture and GIS at UW-Madison while working on two more farms in Sun Prairie, Wisconsin. In May 2007 he joined the Corn Research Program at the Department of Agronomy at the UW-Madison as a Research Specialist. He also dedicates time to his personal project, Gamou Organic Farms, a farm and training center where Malian and U.S. agriculture and veterinary students can get hands-on experience.

Professor of Geography
University of Wisconsin-Madison

Matt Turner is a professor of Geography who has been working in central Mali since 1987 (Mopti Region). His current work is on the changing nature of local governance of natural resources at the commune level and the mapping of key pastoral resources (resting points, water points, and movement corridors) to facilitate land-use planning. While he has done work in Gao and Timbouctou in the past, his current work is on the southern edge of the area of warfare–the Mopti region including the town of Konna, the invasion of which prompted French military operations.

Africa South of the Sahara list of sources for news, including news sites from Mali

Resources compiled with the help of the Center for African Studies at the University of California, Berkeley