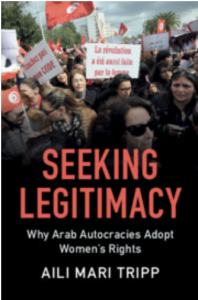 We are so excited to announce that Professor Aili Mari Tripp’s Seeking Legitimacy: Why Arab Autocracies Adopt Women’s Rights (Cambridge University Press, 2019), has been selected as one of two 2021 L. Carl Brown AIMS Book Prize winners. AIMS is the American Institute for Maghrib Studies. The award will be announced at the October meeting of the Middle East Studies Association.

Aili Tripp is Wangari Maathai Professor of Political Science and Gender & Women’s Studies and Chair of the Department of Gender and Women’s Studies. Tripp’s research has focused on women and politics in Africa, women’s movements in Africa, women and peacebuilding, transnational feminism, African politics (with particular reference to Uganda and Tanzania), and on the informal economy in Africa. Her current research involves a comparative study of women and legal reform in North Africa. She is also coordinating a related research project on Women and Peacebuilding in Africa, funded by the Carnegie Corporation of New York and the Foreign Ministry of Norway, involving research in northern Nigeria, South Sudan, Sudan, Algeria, and Somalia. The researchers are from Nigeria, Uganda, Somalia, Sudan, Norway, and the United States. She recently has won awards from Fulbright, the American Academy in Berlin, and the Center for Research on Gender and Women at the UW-Madison. 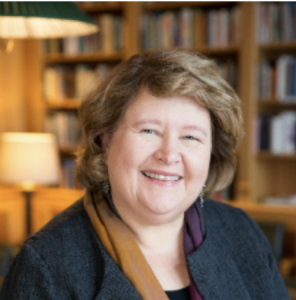 She is the author of several award-winning books, including Women and Power in Postconflict Africa (2015), Museveni’s Uganda: Paradoxes of Power in a Hybrid Regime (2010), African Women’s Movements: Transforming Political Landscapes (2009) with Isabel Casimiro, Joy Kwesiga, and Alice Mungwa, and Women and Politics in Uganda (2000). Her first book was Changing the Rules: The Politics of Liberalization and the Urban Informal Economy in Tanzania (1997). She has edited Sub-Saharan Africa: The Greenwood Encyclopedia of Women’s Issues Worldwide (2003), and co-edited (with Balghis Badri) Women’s Activism in Africa (2017), (with Myra Marx Ferree and Christina Ewig) Gender, Violence, and Human Security: Critical Feminist Perspectives (2013), (with Myra Marx Ferree) Global Feminism: Transnational Women’s Activism (2006), Organizing, and Human Rights, (with Joy Kwesiga) The Women’s Movement in Uganda: History, Challenges and Prospects (2002) as well as (with Marja-Liisa Swantz) What Went Right in Tanzania? People’s Responses to Directed Development (1996).

Tripp has been the recipient of numerous awards and honors, including the African Politics Conference Group best book on African politics award, the Victoria Schuck award of the American Political Science Association for the best book on women and politics. In 2014 she won the African Studies Association Public Service Award. She is currently active on the steering committee of the American Council of Learned Societies’ African Humanities Program.