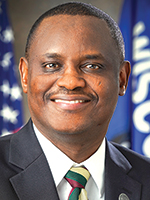 What is your background?

I am a native of The Gambia, in Western Africa. I emigrated to the States a little bit over 22 years ago. My educational and employment background is in informational technology and software engineering. My political career began in 2015 when I was elected to the Madison Common Council (city council) and served for six years. Currently, I am the Representative for the 48th Assembly District which includes the eastern and northern parts of Madison, including the Village of Maple Bluff.

Tell us about the Sister City Program with Kanifing, The Gambia.

In 1998, the City of Madison established a Sister City Program to promote cultural exchange, develop international friendships on the individual level, and work for peace and understanding of all cultures. Since 1998, the City of Madison has established nine sister-city relationships. The Sister-City relationship between Madison and the municipality of Kanifing, The Gambia, established on May 17, 2016, is one of them. Both Madison and Sun Prairie have significant populations of Gambians.

Madison’s relationship with our Sister Cities, including Kanifing, is essential to breaking down barriers to cultural understanding and connecting with our city’s immigrant populations. In November, a delegation was organized to visit Kanifing, Gambia (led by Mayor Satya Rhodes-Conway). The delegation will cover topics such as education, local government, environment, and waste management. We hope to expand the Sister City Programs to more cities in the future.

What have been the benefits and challenges in building relationships for the Sister City Program in Kanifing?

At the time that the program started with Kanifing there was a change in the federal government. The previous government was a military government that was in place for 20 years. There were challenges in the transition from a military government to a civilian government. During this transition, Kanifing had a new Mayor, Talib Ahmed Mensouda, who was the youngest Mayor in the history of The Gambia. He wanted to learn how things were done, so we invited Mayor Talib and his administration to visit different agencies in Madison. These meetings exposed Mayor Talib and his administration to the ways Madison tackles issues such as solid waste, planning, etc..

A major challenge was with waste management, collecting the waste, and effectively disposing of the waste in Kanifing. We worked with street departments in Madison who donated over 2,000 dump bins to Kanifing. It helped Kanifing understand how to conduct private government partnerships as Mayor Talib and his administration partnered with business entities about the importance of waste management.

The challenges that exist in this partnership are a matter of resources and technology. For example, Gambia does not have staff that know the operation of a landfill..

How do envision this partnership growing in the next 5-10 years?

There are many Africans in Dane County. My expectation for the next 5-10 years is that this partnership would help integrate African immigrants into Dane County and enhance understanding of each other. My hope is that we leverage our technology to benefit our Sister City Partners to assist those communities to grow to the next level. I envision this partnership evolving to develop a training program in which we don’t have to be present to share knowledge and ideas.

We have been able to develop a partnership between Madison Area Technical College and the University of Gambia with the intent to exchange curriculum and students. This has been a huge benefit to everyone involved, as it creates a diverse workforce exposed to different cultures and reflective of their communities.

What are ways the ASP community can get involved with the Sister Cities?

There are internship programs at the Capitol. We would like to see students of color participating in these programs. There are employment opportunities for those interested in law, political science, and much more.

You can connect with Rep. Samba Baldeh on Twitter.