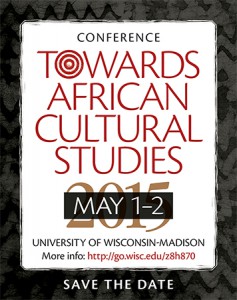 The Department of African Languages & Literature will hold a two-day international conference. For fifty years, the department has taught African languages, African literature, linguistics, and oral tradition. In its strategic plan dated July 2012 that aims to look to the future, the department committed itself to embracing cultural studies as a promising field for renewal and transformation of its academic endeavors both in research and teaching. Cultural studies will make it possible to blend the disciplines we teach in a way that will be more productive and more coherent. In turn, this new approach will allow for a more holistic view of African cultural productions and practices.

Cultural studies makes it possible for scholars to study in a way that is self-reflexive and interdisciplinary a variety of cultural forms and expressions beyond and including literature, such as new media, popular culture, music, visual and performance arts. Moreover, cultural studies will make it possible to examine the relationship between cultural creativity on the African continent and global cultural movements and exchanges, and thus open new avenues of inquiry into economies and politics of African migrations, current as well as historical. The department has therefore begun to realign faculty resources toward African cultural studies. The two-day conference will feature recent faculty recruits—Samuel England, Katrina Daly Thompson, John Nimis, and Matthew Brown—who are all in some way working in this area of inquiry. They will be joined by other younger scholars from other universities as well as a small number of senior scholars from this country and abroad. This will be the centerpiece and culminating event for the year. Its purpose is to create a road map toward the institutionalization of cultural studies in the department. lt will also (re)introduce us as a department (rather than only the individuals who practice it now) to the UW community of departments and programs that already practice cultural studies, and thus foster greater intellectual collaborations and conversations. The department intends to publish the proceedings following the event.