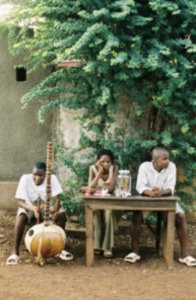 How does one grow up to find happiness? The bildungsroman, or plot of “coming to age,”  is a genre of the Western novel that arose in the late 18th century to answer precisely that question by using stories of young protagonists’ development to examine what leads to happiness.  In this class, students will become familiar with early influential models of the bildungsroman, then look to non-Western narratives of youth as a possible source of different cultural conceptions of the connection between youth and happy living. The course will proceed in two steps: First, students will analyze works of fiction considered seminal of the Western bildungsroman, by authors from the Anglo-American tradition (Germany, Britain, and the United States), to grasp the meanings and expectations that Western culture has attached to youth as a formative period of an individual’s life.  With this in mind, students will turn to narratives of youth from the postcolonial world, mainly from Africa, by writers from Egypt, Nigeria, Sudan, Senegal, Zimbabwe, Guinea, and South Africa.  These works will tentatively be called “postcolonial bildungsromane” (plural, German).  The class will examine the artistic choices in postcolonial bildungsromane and reflect on whatever might be notable, individually or jointly, as a significant similarity or difference to the Western model.  In short, students will be engaging in a cross-cultural exploration of the connection between youth and happiness, and the variety of ways in which literature negotiates aesthetically between often conflicting values like freedom (of choice) and responsibility, or potentially contradictory ideals like adventurousness and practicality. Cultural interpretation and reinterpretations of youth will lead students to evaluate conceptions of the happy life, good citizenship, and participatory membership in a democratic society. Along the way, if less directly, students will periodically turn to broader questions, like:

Students who have a special interest in African literature will have some tools to reflect on why Western readers might bring to African fiction expectations, or preferences, for stories with “hope.”(No prerequisites needed. Texts originally written in French and Arabic will be read in English translations.)

Nirvana Tanoukhi is an assistant professor in English, affiliated with African Languages and Literature and Middle Eastern Studies. Tanoukhi teaches courses on 19th and 20th century British and postcolonial literature, literary theory, and the global Anglophone novel, often from a comparative perspective.