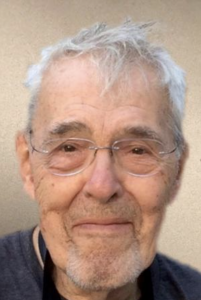 The African Studies Program would like to take a moment to celebrate the life and recognize the passing of Michael (Mike) Briggs, former University of Wisconsin-Madison African Studies Bibliographer. Mike was appointed to develop the program’s library collection, which has since become an outstanding resource for students, faculty, and community members alike. You can access the African Studies Library Portal here, and contact current African Studies Librarian Emilie Songolo for any additional information about the library and its collections.

The following obituary is courtesy of Madison.com. To read it in full, please click here.

Mike was born in the town of Holt, in the county of Norfolk, England, on Sept. 1, 1934. He attended the University of Exeter, where he met his future wife Norma, who was from London. Both were English majors. They wed on June 30, 1956. In 1958, Mike and Norma immigrated to the U.S. and went to graduate school at UNC-Chapel Hill. Their three daughters were born in Durham.

Mike graduated from UW-Madison law school in 1975. He worked as a parole and probation administrative law judge, and also served three terms as a Madison City Council Alderman. Norma also went to law school and graduated in 1984. When Mike retired as an ALJ, he joined Norma in her private practice.

In 1999, Mike and Norma moved to Oregon, Wis. Norma designed the house, and transformed their 10 acres of land into an amazing garden. They were avid Scottish Country Dancers for decades. Norma died in April 2015, and Mike moved to the Capitol Lakes retirement community in downtown Madison. He continued to practice law pro bono, assist his neighbors with estate planning, and play an active role in progressive politics.

Mike will be deeply missed. He was preceded in death by his wife, Norma; and son-in-law, Andy. He is survived by his daughters, Carolyn (Becca), Helen (Jon), and Marian (Kevin); son, John (Lena), foster son, Chukwuma (Cindy); and brother, Colin (Shirley). Mike is also survived by five grandchildren, Alison, Kelsey, Emma, Tatum and Cade; and one great-grandchild Adelynn.