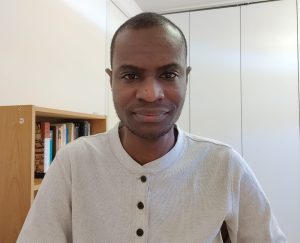 Jibril Gabid is a Ph.D. student in the Department of African Cultural Studies, UW-Madison. He graduated from the University of Ghana with a double major in Arabic and Psychology. He also earned an M.A. in Arabic Language and Literature from the Department of Arab and Islamic Civilizations at the American University in Cairo. Prior to that, he was at Ain-Shams University, Cairo, where he obtained a certificate in Arabic language and literature. Jibril speaks Arabic, English, Hausa, Zarma, and Twi. He teaches first and second-semester Arabic and is currently learning Swahili.

What is the most exciting part of teaching Arabic in the U.S.?

Teaching languages is not just a job but an intellectually gratifying art. Before UW-Madison, I taught Arabic as a foreign language at beginner, intermediate, and advanced levels and coordinated the maiden Arabic Language Immersion program in Ghana. However, the most interesting part of teaching Arabic in the U.S. is the ability to experiment with the communicative method and blended learning techniques, which create a learning environment where students can engage at any level in the language. In addition, teaching Arabic at UW-Madison has allowed me to learn about different cultures and languages through my interactions with a multicultural pool of language instructors and students. Cultural competence is fundamental for my professional development as a language instructor and a graduate student.

My teaching philosophy is anchored on the idea of ‘building a learning community that explores Arabic language and culture through interactional practices.’ Therefore, I give precedence to the communicative aspect of the language by creating real-life situations and using culturally relevant materials, including poetry and music, thereby increasing opportunities for students’ use of Arabic for communicative and contextualized purposes.

Tell us about the teaching excellence award you won last year.

The Honored Instructor Award is an award given to recognize an instructor’s contribution to student learning. Honestly, I did not know about the award. I got a message from a colleague at the event and picked the award on my behalf. It feels good that one’s work is being appreciated. As instructors, it is not always the case that we get such recognition. In the citation that accompanied the award, one student wrote: “I feel grateful to him for fueling my passion for the language with his admirable teaching.” The feeling of knowing that you inspire some of your students is beyond words.

How does your teaching relate to your research?

My research interest is West African Arabic, focusing on 19th– and 20th-century literary productions and Muslim intellectual history. I work primarily with Arabic manuscripts in dialogue with Ajami manuscripts. My master’s thesis covered the works of al-Ḥajj ʿUmar ibn Abi Bakr ibn ʿUthman Krachi (1856–1934), the 19th-century Ghanaian scholar of Nigerian origin. It analyzed four poems that fall into the three main genres of classical Arabic poetry: panegyric, invective, and eulogy. It also featured an appendix of critical editions and translations of the selected manuscripts. However, my doctoral research goes beyond textual analysis. It attempts to foreground West African Muslim scholarship within the larger discourse on Africa and the global network of knowledge production and transmission. Thus, I explore ways of (re)imagining West African Muslim intellectual history and attempt new readings of their literary productions and textual legacies, recentering Islamic West Africa within the larger discourse on Africa and the Islamic world.