This course will examine the origins and forms of what a legal scholar once called an “odious scourge : genocide. For years, genocide mainly referred to the Nazi attempt to exterminate the Jews during World War II. However, since the end of the Cold War events in Eastern Europe, Central Africa, and elsewhere have drawn scholars’ attention to genocide as a political phenomenon that may be studied across regions and time periods. This course is designed to introduce students to the major debates surrounding the study of genocide: how should “genocide  be defined? What problems exist with the concept of “genocide”? Is genocide primarily an international crime belonging to courts and tribunals or is it a macro-social event that social scientists can study? What are the major theories explaining genocide and how effective are these theories? Is every case unique or do all the cases demonstrate consistent patterns? Finally, how might genocide be prevented? 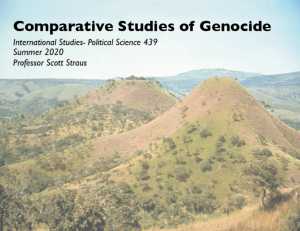 The course will draw attention to these questions through the study of particular cases: in particular, the Armenian genocide, the Holocaust, Cambodia under the Khmer Rouge, the dissolution of Yugoslavia in the late 1990s, and Rwanda in 1994. The course will also take stock of “negative cases”: places that have the theoretical ingredients of genocide but where some other outcome occurs. Although ethical and policy concerns will underlie the discussion of each case, as they do whenever genocide is the topic of study, our main objective will be to examine the determinants of genocide.