The African Studies Program would like to extend our appreciation for Mark Lilleleht, Assistant Director for Awards at IRIS. 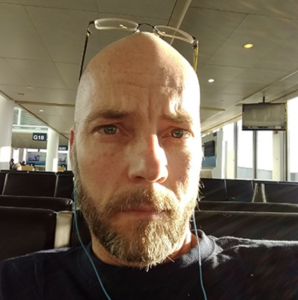 Mark’s commitment to African Studies Program spans over two decades. He began his tenure at UW as a graduate student in African Languages and Literature and took on an hourly position with our Program. Mark continued to work with African Studies after convincing Jim Delahanty, former Associate Director of the African Studies Program, that he could make a better website for the Program than its contemporary late-90s iteration. For the next five years, Mark worked with African Studies in various capacities—as a PA, a FLAS recipient studying Swahili, and a coordinator of two summer cooperative language programs in 1998 and 2000s.

Mark also acted as a key player in planning the African Studies Literature Conference, working with our Program and his home department to plan the event in Fez, Morocco in 1999. His work with African Studies and in African Literature shaped Mark’s dynamic interests in regional studies. After his graduate program, Mark was hired to help the regional centers at UW and has worked with the area studies programs ever since.

Mark has been integral to the changes that have been happening at IRIS since he started there. In his early career, his office was called Global Studies. From 2003 to 2016, he worked as an Outreach Coordinator and ran Go Global!, a program that supported undergraduate students who wanted to work internationally after graduation. Beginning in 2012, Mark helped to evolve this program into IRIS-NRC, when he took on various roles, including Interim Associate Director, campus fundraising, and continuing his work on a variety of student funding programs.

In 2016, when Erin Crawly retired, Mark took over her position running the campus Fulbright US Student Program process among other awards. Students who know Mark have undoubtedly experienced his unwavering support of grant applications and his generous attention to every inquiry. This is an experience that has become even more apparent to graduate researchers as Mark has continued to support Fulbright applicants and awardees whose plans have fallen apart during the pandemic. He oversees the Fulbright US Student Program (FUSP, previously IIE), Fulbright-Hays DDRA, assists with FLAS coordination across centers, Boren Fellowships, CLS awards, and more.

Although committed to all area studies students, Mark has a special place in his heart for African Studies, which he calls “home.” He said our Program “really gave me every opportunity I had, sort of opened the door to every opportunity I had beyond the academics. It was my work on the administrative side, running programs and conferences, that opened doors for my career. Giving presentations at conferences, being taken seriously as a scholar, it was foundational in many respects.”

According to Diana Chioma Famakinwa,

I first crossed paths with Mark during my time as a graduate student here at UW–Madison. He generously provided guidance and feedback on my Fulbright-Hays DDRA application, which was ultimately successful. Now, as a staff member, I have found Mark to be just as generous in his willingness to assist students, faculty, and staff in a variety of areas. I am constantly amazed by his wealth of knowledge and expertise, and I am so grateful to have him as a senior colleague in the International Division. The African Studies Program has Mark to thank for the smooth administration of the Foreign Language and Area Studies (FLAS) fellowship and several other funding opportunities.

The students that Mark tends to work with are those who are leaning toward applying for one of the grants his office manages. In other words, they’re “students who have selected their way in.” However, Mark recognizes that it is the people who are not aware of these grants or who quickly decide not to apply who need him the most. He hopes to connect more with students who think that the door to funding is closed so that he can help them assess, with complete information, if that is a door is one worth “pushing their way through.” According to Mark, apply for everything you are interested in and have the time to apply for. He wants to help more than just graduate students planning for dissertation research. If you are a freshman, in your first African Studies related class, or have finished your degree, there are opportunities for you that Mark can help you find.

You can learn more about IRIS-managed funding opportunities here.