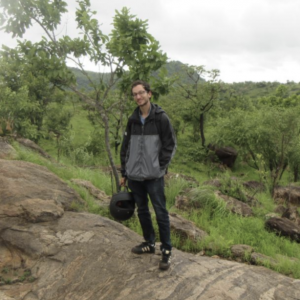 Sam Meyerson is a PhD student in African History–a social and political historian with interests in interethnic relations, conflict, historical memory, environmental history, and the state in postcolonial Africa. He is particularly interested in how these themes are intertwined in the political, social, cultural, and economic networks that anchor individuals within their communities and bind them to members of neighboring groups. His M.A. thesis at Makerere University focused on the historical relationships between pastoral and agricultural communities in the Karamoja region of northeastern Uganda. His upcoming doctoral research will examine the complex interactions between pastoralists in northeastern Uganda and northwestern Kenya and the colonial and postcolonial state.

Tell us about your research.

“My MA research at Makerere University examined the role of historical memory in shaping collective identities and intergroup relations among herding and farming communities in northeastern Uganda. Since arriving at UW, my studies have taken me in some new conceptual directions. My proposed doctoral research will focus on the transnational networks that link pastoral communities in northeastern Uganda to their cultural and linguistic relatives in Kenya, South Sudan and Ethiopia, and investigate how these networks have coexisted and clashed with state structures since the colonial period. While my MA thesis was mostly based on oral history interviews and archival analysis, I’m looking forward to making use of some new research methodologies in my doctoral fieldwork, especially ethnographic observation and description.”

What sparked your interest in African History?

“This is a question that I’m asked quite frequently. I became interested in African history at a fairly young age—around 13 or 14 years old. I grew up in a Jewish family, and for much of my childhood, I attended a Jewish school where the history curriculum was largely centered around the persecution and adversity experienced by Jews over the centuries. Naturally, I became interested in the forms of oppression faced by other groups of people around the world, and by my high school years I had developed a fascination with the colonial encounter and its more contemporary legacies in regions like Latin America and Africa. When I got to college, I made the decision to focus specifically on East Africa, and the guidance of some great professors and mentors set me down the path I’m on today.”

How did your MA program at Makerere University influence your perspective of African History?

“The two years I spent at Makerere University have been crucial to my growth as a scholar. Academically, Makerere taught me a great deal about the differences between approaches to higher education and scholarship in Africa and the West, and about the multiplicity of perspectives on Ugandan history that exist within the country. Spending time on campus at Makerere gave me insight into the important but somewhat uncomfortable position that the discipline of history occupies within the context of Ugandan politics and underscored the vital role that historians—both inside and outside of the academy—have to play in pressing contemporary issues.”

While the COVID-19 pandemic has made research plans precarious, at best, tell us about your tentative fieldwork plans.

“As I mentioned above, my doctoral fieldwork will focus on pastoral communities in northeastern Uganda and northwestern Kenya and their relationships with each other, their neighbors in Ethiopia and South Sudan, and the state. In Uganda, I’ll establish a base of operations in Kotido district in the Karamoja region, which was also the site of much of my MA fieldwork. In Kenya, my primary field site will be the northern section of Turkana County, around the towns of Lokichogio and Kakuma. Aside from the oral history interviews and ethnographic observation that I’ll conduct in those areas, I also intend to make use of the Kenya National Archives in Nairobi and the Uganda National Archives in Kampala, along with a number of smaller regional archives.”

What do you think African history has to offer historians of other regions?

“I think there are a number of theoretical and methodological approaches that have emerged out of African history, including concepts such as ‘wealth in knowledge’ and methods such as the analysis of oral tradition, that would greatly benefit historians of all regions. But more fundamentally—as many scholars have pointed out—it’s crucial that Africa be granted a place in the wider conversations circulating in the historical discipline. The cultural, social and political contexts in which African histories unfolded are unique, but so too are those in which European, Asian and South American histories played out. To assume an inherent distinction between African history and the histories of other parts of the globe is to essentialize Africa and its peoples and to ignore the fact that African history has much to offer to all historians.”