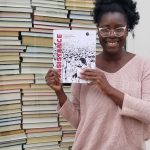 Jacqueline-Bethel Mougoué served as a consultant for a project depicting Cameroonian women’s political history commissioned by Initiative Perspektivwechsel, an organization based in Germany and Cameroon that seeks to disseminate knowledge about politics in Africa. The graphic novel, Résistance: Trois Générations de Lutte Anticoloniale au Cameroun, is now available in French and German and includes the graphic history of the Anlu Rebellion, a women’s uprising that took place in 1950s British-ruled Cameroon.

You can access the graphic novel for FREE here.

As an interdisciplinary feminist historian, Professor Jacqueline-Bethel Mougoué is particularly interested in the gendering of identities in Africa. The dominant themes that connect her research interests and publications include how the constructions of gender inform the comportment and performances of the body, religious beliefs, and political ideologies. She has been invited to give plenary talks on my research at various academic institutions including Paris Diderot University (France), University of Leuven (Belgium), and University of Buea (Cameroon). She has been a fellow at Northwestern University (United States) and NUI-Galway (Republic of Ireland). Her work has received support from various organizations including the West African Research Association and the American Historical Association. She currently sit on the editorial advisory board for Feminist Africa and the Journal of Women’s History.