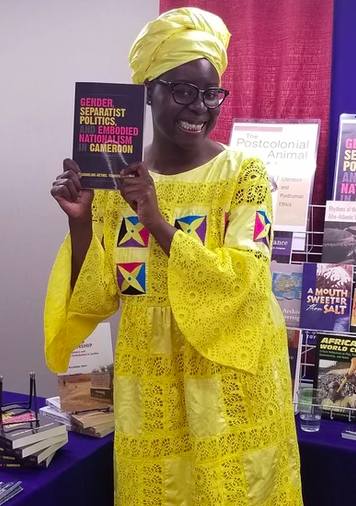 Based on extensive and original research, Gender, Separatist Politics, and Embodied Nationalism in Cameroon (University of Michigan Press) forces us to pay attention to the roles women played in the separatist movement of Anglophone Cameroon in the years immediately after independence. Dr. Jacqueline-Bethel Tchouta Mougoué’s research demonstrates the important roles played by women, whether as politicians or leaders of organizations. But she also shows how ideas of gender norms, and of ideal womanhood in particular, were key to the construction and reproduction of an Anglophone Cameroonian identity. Mougoué beautifully navigates the contradictions and tensions experienced by this generation of women alongside their central contribution to the separatist movement.

Through the everyday lives of elite women in Anglophone Cameroon, this book presents a highly charged political experience and situation in which women were not only able to form bonds but also resist and protest against French domination. Mougoué skillfully shows the varied ways in which women contributed to and maintained ethnic and separatist politics in Anglophone Cameroon through food, choice of dress, language, activism in women’s organizations, etc. The vast array of sources used by Mougoué in her research – oral interviews and archival records such as women’s newspaper advice columns, etc. – are quite outstanding and impressive. Her innovative approach can be seen, for example, in her close reading of a cookery book. Gender, Separatist Politics, and Embodied Nationalism in Cameroon is an important book that centers the agency, creativity and involvement of women in Anglophone separatism in Cameroon.

Dr. Mougoué is an Assistant Professor of African Cultural Studies at the University of Wisconsin-Madison. She is an interdisciplinary feminist historian whose research centers on the gendering of identities in Africa. This includes how the constructions of gender inform the comportment and performances of the body, religious beliefs, and political ideologies.

This news is shared from the African Studies Association Women’s Caucus. Read the original post here.

Read more about the co-winners here.